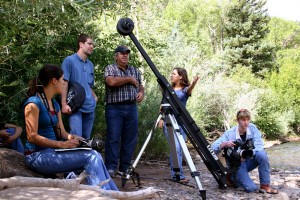 August 3-7, 2009 we held the 2009 Rocky Mountain Christian Filmmakers Camp.  Our instructor was Norton Rodriguez.  Norton has over 25 years of film and television production experience.  He is a veteran Film and TV producer, director, and director of photography in the film and television industry/ministry in South Florida.

At this camp students learned

The camp started with some classroom time with Norton explaining various aspects of filmmaking.  Then the students had hands-on lab time to try out what they learned.  The last two days of camp students put what they learned into practice by shooting a short film called Hearing God.

A young woman’s life is turned upside down as she loses one of her most vital senses.  Assisted by her brother, she faces the struggles brought by her ailment, and searches for what it truly means to hear God’s voice.