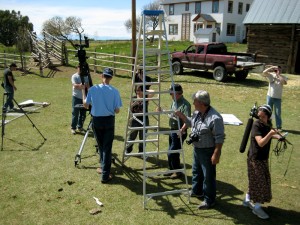 May 16-21, 2010 we held the 2010 Rocky Mountain Christian Filmmakers camp.  Our instructor was once again Norton Rodriguez.

The camp started with some classroom time with Norton explaining various aspects of filmmaking.  Then the students had hands-on lab time to try out what they learned in the production of a short film.  They read through several scripts written by students, and selected John’s Miracle, written by Dave Shaver.  Norton walked the students through the pre-production process of scene breakdowns, casting actors and selecting crew, and then the last two days were spent shooting.

A young man gets a summer job to do something with the time he has left. The ranch where he works is run by a grumpy older man who has nothing left in his life to enjoy. The two develop a strong friendship and ultimately, the rancher is moved to live up to a higher name than his own.